The following report highlights the political dialogue between the Government and the opposition, a shootout between villagers in northeast of Abidjan, and reactions to President Alassane Ouattara’s appointment of one-time opponent to lead sub-regional body. The report includes background information to add context to the news items.

An Ivoirian investigative journalist expressed doubt over the success of the ongoing political dialogue between the Government and the opposition. In a 27 December 2021 news conference, State Prosecutor Richard Adou threatened to bring to court major political leaders that he accused of instilling violence around the October 2020 presidential election. Official figures said that 85 people died and more than 500 others were injured during the violence between August and November 2020. The journalist questioned the timing of Adou’s news conference and his alleged accusations of Henri Konan Bedie, leader of the Democratic Party of Cote d’Ivoire (PDCI) and Pascal Affi N’guessan, leader of the Ivoirian Popular Front (FPI) in the electoral violence.

Background: Observers said that the Ivoirian Government put in place a special unit to investigate the 2020 presidential election violence following a request by Human Rights Watch. The special unit that was led by Richard Adou and included Police and Gendarmerie officials.

Four Dead in Shootout Between Villagers Near Alepe, 40 Km, Northeast of Abidjan

APA, via Abidjan.net on 4 January report that four people were killed on 3 January in a shootout between residents of the village of Kodioussou in the subprefecture of Danguira, department of Alepe, 40 Km northeast of Abidjan. Security sources were unable to offer the reasons behind the tragedy. However, they noted that beside the deaths, the material toll shows several homes ransacked and burned down. Authorities have dispatched about 100 members of security forces to restore calm. FURTHER AS AVAILABLE 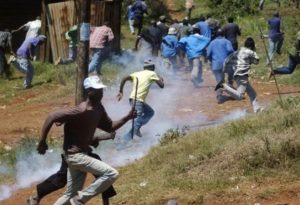 Justice Konan, a pro-Ouattara Facebook alias with 23,201 subscribers, on 4 January posted that Junior Foreign Affairs Minister Alcide Djedje was organizing a ceremony whereby Marcel Amon-Tanoh, a former faithful aide, then a sudden harsh opponent, to President Ouattara, would replace Patrice Kouame as Executive Secretary of the Conseil de l’Entente, a sub-regional body founded in 1966 and bringing together Benin, Burkina Faso, Cote d’Ivoire, Niger, and Togo. Given Amon-Tanoh’s very harsh stance against President Ouattara just a year ago, his unexpected appointment raised some eyebrows with most of the 165 Internet users who commented the post saying that “no one can really understand the dynamics of politics in Africa.” Some suggested that Amon-Tanoh was “receiving an award for acting as President Ouattara’s spy” in the opposition’s National Transitional Council, created circa 2020 to contest Ouattara’s third term bid. 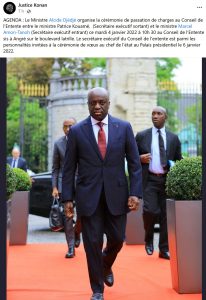 Journalist Warns Political Activists Against ‘Following Men Instead of Values”

Reacting to President Ouattara’s appointment of one-time staunch opponent Marcel Amon-Tanoh, journalist Andre Silver Konan on 4 January posted on his Facebook page with 548,000 subscribers “This is why I keep telling you: do not follow men, follow principles. Men can prove disgraceful, principles never. May God give us the right understanding!” The post garnered 213 likes and 154 comments in one hour. Many users supported Konan’s idea that values and principles should guide politics, not personal interests. However, quite a number of people commended President Ouattara as a “man who keeps no grudge,” adding that “Guillaume Soro, the runaway Ouattara stalwart, should read this move as an opportunity for himself.” 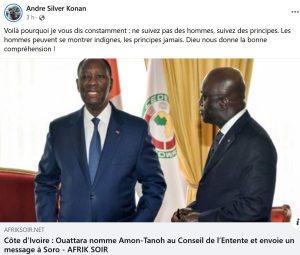