The following report highlights President Ouattara’s New Year address, COVID-19 update, reactions to a planned government reshuffle, and reactions to the Abobo Municipality’s decision to cancel a concert by a committed reggae artist. The report includes background information to add context to the news items.

In his New Year’s address on 31 December, President Alassane Ouattara highlighted the priorities for his administration for the year 2022. Regarding security, Ouattara pledged to reinforce the capacities of the Defense and Security forces and increase socio-economic infrastructure investments in the areas under terrorist threats. He also pledged to consolidate the achievements of the last 10 years of his “United Cote d’Ivoire” project and speed up the structural transformation process of the Ivoirian economy. The President said that his administration is targeting a 7 percent economic growth despite the COVID-19 pandemic. He decided to launch an award on good governance and the fight against corruption. Ouattara expressed his willingness to continue the political dialogue with the opposition. He also decided to sign a decree granting pardon to nearly 2,500 prisoners who will regain freedom, but stressed that the measure does not apply to people convicted of blood crimes.

COVID-19 Update as of 2 January

Independent journalist Andre Silver Konan on 2 January posted on his Facebook page with more than 548,000 subscribers a link to an article on his online newspaper Afrik Soir with the title “Cote d’Ivoire: Ouattara Plans a Cabinet Reshuffle in January.” As of 3 January, at 15:04, the publication garnered 109 likes and 30 comments. Among users who commented the publication, some opined that President Ouattara should just “dissolve the Senate, the recently appointed Ministers Governors, and the secretaries of state to save money.” Others said that this reshuffle will only amount to musical chairs playing with “some officials being removed from government only to be offered tailored and useless positions.” 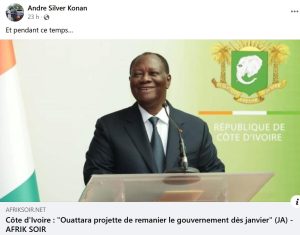 In a 2 January publication, Andre Silver Konan writes that the RHDP-led municipal council of Abobo (northern part of Abidjan, on 2 January cancelled a long-planned concert of Tiken Jah Facoly, a reggae artist known for his hard speeches against past regimes and former presidents Bedie, Guei, and Gbagbo. The official reason for the cancellation is that the council deemed inappropriate the venue chosen for the function. But for the 426 users who commented and 2,300 who liked the publication as of 3 January at 15:42, the cancellation may have a link with the artist’s upcoming song “Gouvernement 20 ans.” The song paints Ouattara’s perceived habit of giving a 20-year jail term to whoever opposes his power. Some clusters of comments opposed President Ouattara supporters who were parted on the artist’s right to criticize their leader or not. Some users said Tiken Jah now has an opportunity to see the difference between the presidents he could freely criticize and “President Ouattara who is not open to criticism.” 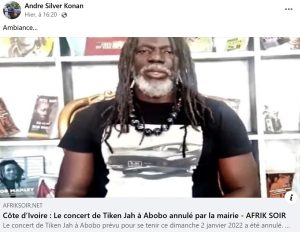