The following report highlights opposition leader’s reaction to threats of prosecution, COVID-19 update, and a joint successful liver transplant by Ivoirian and Egyptian surgeons in Cote d’Ivoire. The report includes background information to add context to the news items.

Media reported that following recent accusations by State Prosecutor Richard Adou saying that Henri Konan Bedie could be brought to justice for the violence occurred during the 2020 presidential election, his party, the Democratic Party of Cote d’Ivoire (PDCI), issued a statement. The statement said that only supporters of President Alassane Ouattara’s third term are the real responsible for the violence.

Background: During a 27 December news conference, Prosecutor Adou accused opposition party leaders of being responsible for the violence after they called for civil disobedience. He said that they could be brought to justice. It is worth noted that the decision comes at a time when the Government and opposition parties engaged in a political dialogue.

Media reports quoted President Ouattara and Prime Minister Patrick Achi of praising a collaboration between Ivoirian and Egyptian surgeons in the first liver transplant n Cote d’Ivoire. The operation occurred on 27 December. Reports said that PM Achi met with the surgeons at his office on 29 December and reaffirmed the Government’s willingness to make Cote d’Ivoire a health hub in West Africa.

Background: Cote d’Ivoire aims to become a health hub. The World Health Organization supported the county in a liver transplant, after a successful kidney transplant in 2012. 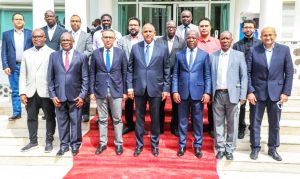