The following report highlights results from a special investigation unit relating to the 2020 presidential election violence, speculations relating to threats by the State Prosecutor to prosecute opposition leaders involved in the violence, public reactions to the Prosecutor’s move, and COVID-19 update. The report includes background information to add context to the news items.

During a 27 December news conference relating to the 2020 presidential election violence, Richard Adou, the Prosecutor of the Republic, presented the report from a special investigation unit made up of 40 police officers and gendarmes and led by the Prosecutor. The Prosecutor said that to date, 233 people were arrested for election-related violence in several localities, adding that the security forces are actively seeking 40 other people for their role in the violence. Adou declared that the election violence “officially” claimed 85 lives and approximately 500 injured people between August and November 2020.

Background: In 2020, a coalition of opposition parties led by Henri Konan Bedie, the chairman of the Democratic Party of Cote d’Ivoire (PDCI), called on the Ivorian population to mobilize for demonstrations throughout the country as well as for civil disobedience and active boycott to prevent President Alassane Ouattara from seeking a third term in office. Following the various calls to the population, the opposition announced the establishment of a transitional body called the National Transitional Council to replace the legally established republican institutions. 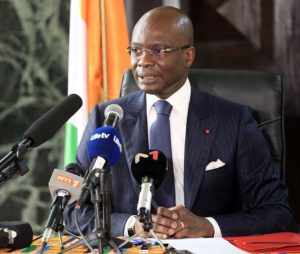 After the Prosecutor of the Republic presented a report from the special investigation unit and called for the prosecution of all people responsible for the 2020 presidential election violence, Ivoirian media speculated on possible implications for the peace process if the Ivoirian justice prosecutes Bedie and other major opposition leaders including Affi N’guessan, Guillaume Soro, Simone Gbagbo, and Mabri Touakeusse, among others. Other media outlets accused President Ouattara of maneuvering to prevent an inclusive political dialogue.

Background: A political dialogue between the Government and the opposition is ongoing. Some observers opined that the Prosecutor of the Republic’s move could jeopardize the dialogue and the peace process.

A 27 December post on the Facebook page (with more than 548,000 followers) of Journalist Andre Silver Konan on the Prosecutor of the Republic’s news conference generated 117 likes and 113 commentaries as of 1340 GMT on 28 December. The commentaries were mixed. While some of them commended the Prosecutor for seeking to bring to justice the people responsible for the 2020 presidential election violence, others questioned the timing of the decision amid the ongoing political dialogue.