The following report highlights the Ivoirian Government’s decision to impose parafiscal taxes on construction materials, the resumption of political dialogue, the donation of COVID-19 vaccines by Italy and Spain, and reactions to the Government to disburse $43 million to rehabilitate a China-donated Olympic stadium. The report includes background information to add context to the news items.

Following a 15 December Council of Ministers, The Ivoirian Government decided to impose parafiscal taxes on certain construction materials to finance social housing projects. Media reports said that the measure aimed at creating the conditions for stable and sustainable financing of social housing. The resources mobilized through the parafiscal taxes will amount to approximately $51 million per year and will be used to finance the social housing policy, in particular the purging of customary rights, the construction of roads and other networks, the guarantee of credits for buyers and promoters, and the industrialization of the housing sector as a whole.

Background: The Ivoirian Government’s social housing policy aims to relieve the populations, who, according to official figures, are facing a deficit of 400,000 housing units per year. Through the program, the Government aims to curb the effects of the strong demographic growth and remedy the effects of under-investment in this sector.

Background: Political observers said that the current dialogue aims to prepare the 2023 local elections and to maintain a peaceful socio-political atmosphere in the country.

The Ivoirian Ministry of Health received 2,268,000 doses of Johnson&Johnson COVID-19 vaccine from Italy and Spain on 15 December. The donation will enable Cote d’Ivoire to have a considerable quantity of vaccine doses to boost the vaccination campaign it launched on 10 December throughout the country. 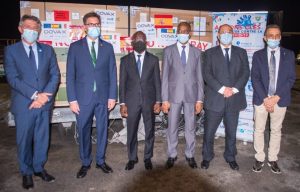 Journalist Andre Silver Konan on 15 December posted on his Facebook page with 548,000 subscribers a link to a story on the Chinese Embassy in Cote d’Ivoire protesting the Ivoirian authorities’ decision to allocate approximately 43 million to set a China-donated Olympic Stadium to international standards. According to the Chinese representation, China built the stadium based on specifications provided by the Ivorian side and should not need fixing just a year after its inauguration. The post garnered 142 comments and 245 sentiments. Netizens were very critical of the Ivoirian Government they accused of “having so many ways to embezzle public funds.” Others wondered why the stadium was named after President Alassane Ouattara while it is a gift. 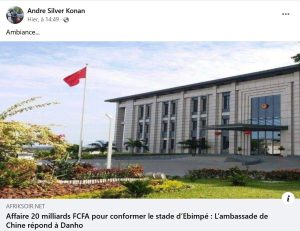