The following report highlights major news developments in politics, health, and security in Cote d’Ivoire as of 15 December. This edition focuses on an interview that former President Laurent Gbagbo granted to a Ghanaian news outlet, a visit to a Health Ministry’s call center, and reactions to President Alassane Ouattara’s announced party reshuffling. The report includes background information to add context to the news items.

A newspaper close to the opposition Democratic Party of Cote d‘Ivoire (PDCI) reported that Laurent Gbagbo granted an interview to the Ghanaian television Panafrican TV during a private visit in Ghana. Among other issues, Gbagbo expressed surprise that his former Youth Minister Charles Ble Goude is still in Europe despite the fact that the International Criminal Court (ICC) acquitted both of them in March. He also said that he was happy that his trial took place in Europe because he would have been “sentenced to 50 years in prison” if he was tried in Cote d’Ivoire. Gbagbo urged Africans to fight to “make our courts independent.”

Background: Gbagbo went to Ghana on 8 December to attend the funeral of Captain Kojo Tsikata, a former head of National Security under the late President Jerry John Rawlings. On 13 December, Ble Goude demanded for compensation from the ICC and called for assistance to enable him to return to Cote d’Ivoire.

A 15 December post on the Facebook page (496,454 followers) of the Ministry of Health said that the US Ambassador to Cote d’Ivoire Richard Bell visited the Ministry’s call center on 14 December. According the post, the Ambassador’s visit aimed to inquire about the working conditions of the teleoperators, who are key players in the national response strategy against the COVID-19.

Background: The Health Ministry’s call center operates 24/7 with 43 agents, who collect the people’s health-related concerns. It also manage rumors related to health issues. The US Government, through Breakthrough Action, supports the call center with working materials. 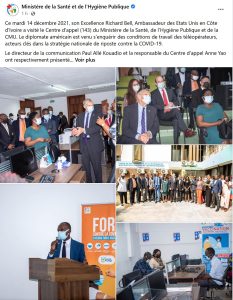 Journalist Andre Silver Konan on 15 December posted on his Facebook page (548,000 followers) a link to an article on his website Afriksoir.net titled “Announced Restructuring of the RHDP: Ouattara’s superficial changes.” The article criticizes President Ouattara’s announced reshuffling of his party’s leadership structure. Konan perceives the changes as a facelifting operation that will not put an end to the fierce internal rivalries that are opposing many senior officials and veteran party comrades. As of 11:23 GMT, the post garnered 62 likes, 11 comments. Users who reacted to the post commented mostly along partisan lines. Some asking Silver Konan to leave it to RHDP activists to criticize their party. Other users said Ouattara is good at facelifting, accusing him of never creating anything on his own.