The following report highlights major news developments in politics, health, and security in Cote d’Ivoire as of 8 December. This edition focuses on a new deadline for the general population census, a mobile vaccination campaign in Abidjan, COVID-19 update, and a joint counterterrorism training by Ivoirian and French troops. The report includes background information to add context to the news items.

Several media reported that the Ministry of Planning and Development decided to extend the deadline for the General Population and Housing Census (RGPH) till 14 December. Difficulties encountered in certain localities, including parts of Abidjan, prompted the government’s decision. To date, the RGPH operation recorded 24,952,249 people out of a projected total of 29,105,787, for a completion rate of 86 percent, according to the authorities.

Background: The 14 December deadline marks the second extension of the operation. Observers said that some people refuse to allow the census agents into their houses.

An 8 December post on the Facebook page (more than 496,000 followers) of the Ministry of Health showed the position of mobile medical trucks for vaccination against the COVID-19 in the Abidjan District. The vaccination teams are present in Anyama, Abobo, Yopougon, Cocody, Bingerville, Adjame, Plateau, Marcory, Treichville, Koumassi, Port-Bouet, and Vridi. 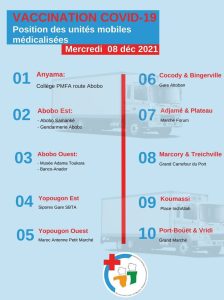 COVID-19 Update as of 7 December

An 8 December post on the Twitter account of the French forces based in Senegal read: “For the past three weeks, the French Forces in Senegal (EFS) marine commandos have been working alongside the specialized intervention units of the Ivoirian Gendarmerie to practice maritime counterterrorism.”

Background: Security experts said that Cote d’Ivoire saw a major escalation of violent extremism throughout 2020, including its first jihadist attacks since the 2016 Grand Bassam incident. Jihadist groups have also targeted the north of the country in 2021. 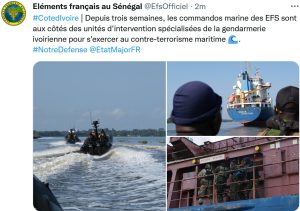