The following report highlights major news developments in politics, health, and security in Cote d’Ivoire as of 2 December. This edition focuses on South African President’s state visit to Cote d’Ivoire, speculations over legalization of homosexuality, and COVID-19 update. The report includes background information to add context to the news items.

Background: President Ramaphosa’s visit to Cote d’Ivoire is part of a regional tour in West Africa, including Nigeria, Ghana, and Senegal.

A pro-government newspaper said that the National Assembly passed several bills, including those on the modification of the penal code. The newspaper quoted Amadou Coulibaly, the Government Spokesman, as saying that the phrase “sexual orientation” was removed and that the Government had no intention to legalize homosexuality in Cote d’Ivoire.

Background: The Ivoirian public and polity have engaged on heated debates over speculations that the government was planning to legalize homosexual marriage with the introduction of the phrase “sexual orientation” in the draft bill.

COVID-19 Update as of 1 December

President Alassane Ouattara on 2 December posted on his Facebook page with 862,000 followers a message relating to the visit of South African President Ramaphosa on 1-2 December. The message reads “On Thursday, I had an excellent meeting with my South African counterpart, Cyril Ramaphosa, during which we discussed ways and means of consolidating and further strengthening cooperation between our two countries. I welcome the signing of nine Cooperation Agreements that will intensify and energize our strategic partnership.” Some 2,600 users liked the post, 119 commented and 136 shared it. Most comments were appreciative of the visit and the strengthening of the cooperation. One user, however, said he hoped “President Ramaphosa did not carry with him a sample of the Omicron variant of the COVID-19.”

In 2 December post on “Ivoirowski” (@Ivoirowsky), a netizen describing himself as a “pan-Africanist” and “anti-French,” called for caution regarding the COVID-19 Omicron variant following President Ramaphosa’s state visit. 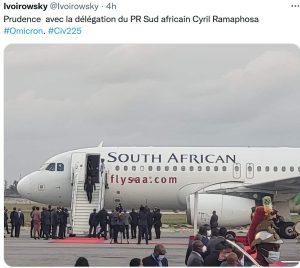