The following report highlights major news developments in politics, health, and security in Cote d’Ivoire as of 1 December. This edition focuses on a planned visit by South African President to Cote d’Ivoire, unchanged fuel prices, a power purchase deal between Cote d’Ivoire and Guinea, COVID-19 update, and reactions to report on a bill likely to favor homosexuality in Cote d’Ivoire. The report includes background information to add context to the news items.

Media reports said that South African President Cyril Ramaphosa will be on a three-day state visit to Cote d’Ivoire starting 1 December. The agenda of the visit includes a 2 December meeting with President Alassane Ouattara, the laying of the foundation stone of the new headquarters of the South African mobile phone company MTN, and a visit to the Abidjan Port Authority.

Background: Trade between Cote d’Ivoire and South Africa recorded an increase of $137 million from 2019 to 2020. President Ramaphosa is also expected to visit Nigeria, Ghana, and Senegal, according to media reports.

The Ivorian Ministry of Mines, Oil and Energy announced that the prices of premium unleaded gasoline and diesel remain unchanged at 615 CFA francs ($1.05) per liter for the 1 to 31 December period.

Background: The adjustment of fuel pump prices in Cote d’Ivoire is done every month in accordance with the provisions of the automatic mechanism of hydrocarbon prices on the international market.

Media reports said that Cote d’Ivoire and Guinea signed a power purchase agreement in Abidjan on 30 November as part of the Cote d’Ivoire-Liberia-Sierra Leone-Guinea (CLSG) power grid interconnection project. Under the three-year contract, renewable by agreement, Cote d’Ivoire will supply Guinea with 11 MW every year from 2021 to 2023, bringing it to a total of 33 MW for the three years.

Background: The CLSG power project is expected to establish a dynamic electricity market in the West African sub-region and secure the countries’ electricity supply. The new agreement is part of the priority projects of the West African Power Exchange System master plan.

Member of Parliament Assures ‘No Law on Homosexuality’ at National Assembly

Independent member of Parliament Antoine Tiemoko Assale on 30 November posted on his Facebook page with 80,000 followers that the National Assembly passed a number of drafts which did not include any law on homosexuality. He explained that the text bearing the phrase “sexual orientation” was amended and the mention removed. The post gathered 2,800 likes and more than 1,000 comments. The post was also shared 361 times. Although many users praised Assale for “always giving account of the proceedings at the National Assembly,” a few comments, however, expressed disbelief at the fact that such a phrase, blatantly encouraging homosexuality, could even appear in a draft. Some users hinted that the MPs had to amend the draft because they heard the uproar among the population. 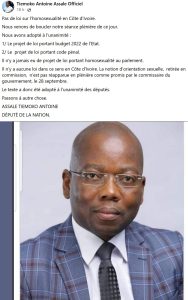