The following report highlights major news developments in politics, health, and security in Cote d’Ivoire as of 29 November. This edition focuses on a report relating to corruption in the timber industry, COVID-19 update, new data on HIV/AIS prevalence in Cote d’Ivoire, and anti-France sentiment. The report includes background information to add context to the news items.

A privately owned newspaper reported that President Alassane recently received a document relating to trafficking and corruption in the timber industry in Cote d’Ivoire. The report said that the document contained names of government officials, high-ranking military, intermediaries involved in the trafficking, as well as a commission book. The report said the “financial scandal” amounts to approximately $86 million.

Background: The scandal occurred at a time when President Ouattara’s Administration launched the “clean hands” operation. In July, the Higher Authority for Good Governance announced that it indicted 500 people over corruption and money laundering among other issues. 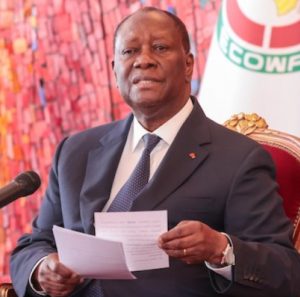 A media report quoted the president of a local NGO that fights against HIV/AIDS as saying that the prevalence rate dropped from 10 to 2.7 percent in Cote d’Ivoire. The report added that there are still spots in the country where HIV-affected people live. The report is based on a seminar on gender-based violence and also on the world AIDS day.

Background: According to government statistics, 9,400 people died of AIDS-related illnesses in Cote d’Ivoire, including 800 children under the age of 14 years in 2020.

A 28 November post on the Twitter account of “Free Gbagbo” (@FreeGbagbo; 2,179 followers), a cyber activist supportive of former President Laurent Gbagbo, accused the French Army of “continuing to kill” young Africans from Cote d’Ivoire and Niger. The post said that the French Army killed 57 people in Abidjan in November 2004 and 3 people in Tera in November 2021.

Background: On 27 November, media reports quoted the Niger Government as saying that at least two people were killed and 18 injured in the west of the country when protesters clashed with a French military convoy they blocked after it crossed the border from Burkina Faso. 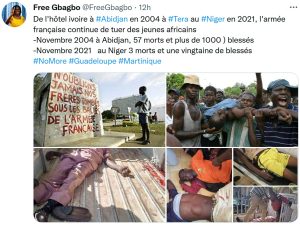