The following report highlights major news developments in politics, health, and security in Cote d’Ivoire as of 24 November. This edition focuses on a meeting between President Ouattara and the president of the UN’s International Fund for Agricultural Development, the upcoming political dialogue in Cote d’Ivoire, and COVID-19 update. The report includes background information to add context to the news items.

President of International Fund for Agricultural Development Meets With Ouattara

Media reported that President Alassane granted an audience to Gilbert Houngbo, the president of the UN’s International Fund for Agricultural Development (IFAD). Both men discussed the opening of a regional office in Abidjan that will cover the entire West and Central Africa. They also discussed issues of gender, the fight against child labor, and global warming.

Background: Before meeting with President Ouattara, IFAD’s president had visited the town of Divo to get to know the realities of the cocoa industry and the cooperatives in the region. 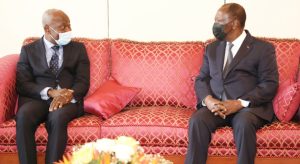 A commentary by a pro-opposition newspaper expressed doubt over the success of the upcoming political dialogue that Prime Minister Patrick Achi announced. The newspaper said that the Government is yet to invite former President Henri Konan Bedie and his allies for the preparations of the dialogue scheduled for December. The paper also said that President Ouattara’s administration will benefit from an inclusive dialogue with the participation of all the major opposition political parties as well as civil society organizations.

Background: On 8 November, Prime Minister Patrick Achi announced the resumption of the political dialogue with the various political stakeholders. Major opposition parties, including the Democratic Party of Cote d’Ivoire (PDCI), have often accused the Government of selecting “minor” parties to take part in political dialogue for the “sake of pleasing the international community.”