The following report highlights major news developments in politics, health, and security in Cote d’Ivoire as of 23 November. This edition focuses on calls from former President Laurent Gbagbo to free jailed soldiers, state mediator addressing illegal gold mining issues, COVID-19 update, and the seizure of an Ivoirian aircraft by a Malian businessman. The report includes background information to add context to the news items.

During a 22 November meeting with his newly-formed Party of African Peoples – Cote d’Ivoire (PPA-CI), former President Laurent urged the Government to release the jailed soldiers who served under him during the 2010-2011 electoral crisis. According to Gbagbo, those soldiers were jailed because they obeyed his orders as former president. He added that there is no reason to maintain them in prison since he was free of all charges of crimes against humanity.

Background: Following the 2010-2011 election crisis, Gbagbo served 10 years jail term at the International Criminal Court in The Hague. Upon his release and return to Cote d’Ivoire, he broke away from the Ivoirian Popular Front and formed the PPA-CI. 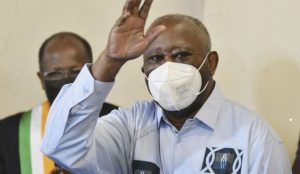 Media reported that State Mediator Adama Toungara addressed the issue of illegal gold mining in Cote d’Ivoire during a recent meeting at the Ivoirian Senate in Yamoussoukro. Toungara said that the Government put in place a special surveillance brigade to tackle the issue. He said that the “illegal gold mining destroys our natural resources, but also attracts people whose moral quality we are not sure of, mainly in this period of terrorism.” Toungara also said that “our brothers from neighboring countries do not come here with good intentions.”

Background: In June, Cote d’Ivoire put in place a special task force to stamp out illegal gold mining in the country. The force is made up of 460 gendarmes and 100 agents of the water and forest department. To date, the task force destroyed 69 illegal sites and arrested 261 people, according to official figures.

A number of Facebook pages, including Souley DeParis B52, Andre Silver Konan, and Agence de Presse Regionale, on 22 November published a story on the ECOWAS Court of Justice authorizing a Malian businessman, Modibo Diawara, to seize a plane of the Ivoirian company Air Cote d’Ivoire, as a compensation for 50 hectares of land he lost in Cote d’Ivoire. The publications generated a total of 1.845 likes and 919 comments. Most comments criticized dysfunctions and weaknesses in the Ivoirian administration that allow a Malian national to acquire up to 50 ha of land in Cote d’Ivoire. Others insisted on the fact that the issue has already been settled; showing that how President Alassane Ouattara is a powerful man. 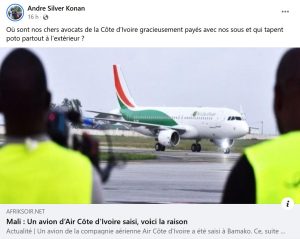