The following report highlights major news developments in politics, health, and security in Cote d’Ivoire as of 22 November. This edition focuses on President Alassane Outtara’s return from Paris, a government CVE initiative, and a visit by ECOWAS chiefs of staff to the International Counterterrorism Academic of Jacqueville. The report includes background information to add context to the news items.

Upon his 21 November return to Abidjan from Paris where he attended the fourth Paris Peace Forum and the celebration of the 75th anniversary of the UNESCO, President Alassane Ouattara reassured the Ivoirians that the Government took “all the measures” on the security and sanitary plan to protect the population. On the security front, Ouattara hailed the Defense Minister’s plan to purchase sophisticated weapons and recruit 3,000 soldiers to contain terrorist threats in the north. Regarding the COVID-19, Ouattara said that the heads of states discussed plans to produce vaccines in Africa, notably in Senegal, Rwanda, South Africa, and Cote d’Ivoire.

Background: President Ouattara expressed concerns following the 20 November terrorist attack on Burkina Faso, which, he said constitutes a threat to the entire sub-region. Participants at the Paris Peace Forum also discussed ways for better governance in time of the COVID-19 pandemic. 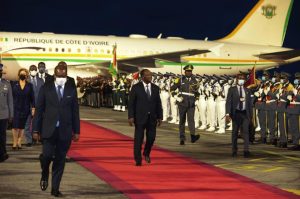 Media reported that Mamadou Toure, the Minister of Youth Promotion, toured the northern part of the country, especially the town of Kafolo, to sensitize the youth against the danger of terrorism and violent extremism. Toure said that the Government put at the disposal of his Ministry a $3,5-million fund to finance projects for more than 3,000 youths as ways to counter proposals by terrorist groups.

Background: Jihadist groups targeted the town of Kafolo twice. There were rumors that extremist groups attempted to win over young people in Kafolo by proposing approximately $860 and a motorbike to each potential recruit among the youth.

According to media report, in the sidelines of the 17-19 November meeting of the ECOWAS army Chiefs of Staff, participants visited the International Academy of Counterterrorism of Jacqueville (AILCT) at 60 kilometers west of Abidjan. The director of the AILCT said that the Academy includes a training school for army officials, a training center for special units, and a strategic research institute.

Background: The AILCT derived from a cooperation between Cote d’Ivoire and France an was inaugurated in June 2021. To date, the Academic held 18 training sessions with 548 soldiers, gendarmes, policemen, and magistrates mainly from the ECOWAS.