The following report highlights major news developments in politics, economy, and health in Cote d’Ivoire as of 12 November. This edition focuses on President Ouattara’s visit to Paris to attend a peace forum, updated on COVID-19, and public reactions to Ouattara’s decision to sack the managing director of the Road Management Fund. The report includes background information to add context to the news items.

On 11 November, President Alassane Ouattara participated in the fourth edition of the Paris Peace Forum. The Forum focused on ways to stimulate a stronger and more inclusive economic recovery through the proposal of initiatives to better manage global issues for a post-COVID-19 world.

In the sidelines of the Forum, Ouattara met with Tunisian Prime Minister Njla Bouden. 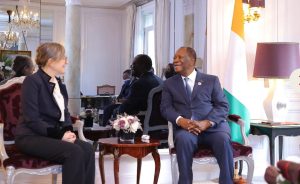 Various Ivoirian Facebook pages on 11 November carried posts on the sacking of Lancine Diaby, the former managing director of the Fonds Routier -FER (Road Maintenance Fund) a parastatal company. The most remarkable pages were those of Lancine Diaby himself, pro-ruling RHDP cyber activist Johnny Patcheko, and Cameroonian journalist Said Penda. Diaby thanked President Alassane Ouattara for his confidence and vowed readiness to serve the country. Johnny Patcheko lamented the sacking on grounds that Diaby fell victim of ungrateful people inside the ruling party. Said Penda, the journalist who, days earlier, uncovered evidence of graft and misappropriation in Lancine Diaby’s management, said the latter should prepare to face justice. The three posts generated 6,600 likes, 2,481 comments, and 583 shares. Most users hailed President Ouattara’s decision to sack Diaby as another move against endemic corruption. However, most of the users who commented Diaby’s post were supportive of him and expressed hope that he would end up at a “higher position.”

Background: Over the last few days, there have been exchanges of Facebook posts between journalist Said Penda and a pro-RHDP Facebook activist named Justice Konan on the alleged discovery of evidence of mass corruption in the management of the FER. President Ouattara, a few months ago, launched an anti-graft campaign that resulted in the sacking, and sometimes, arrest and jailing of some former managers of statal and parastatal companies.