The following report highlights major news developments in politics, economy, and health in Cote d’Ivoire as of 5 November. This edition focuses on COVID-19 update. The report includes background information to add context to the news items.

COVID-19 Update as of 4 November

On 5 November, Investigative journalist Andre Silver Konan in a post on his Facebook page with 545,000 followers reprinted an online media article announcing that Henri Konan Bedie, president of the opposition Democratic Party of Cote d’Ivoire (PDCI), appointed former Energy Minister Thierry Tanoh and two other stalwarts as vice-presidents of the party. An hour after the publication, the post generated 60 comments and 263 likes. One user criticized Bedie for his “tribalistic” appointment at the helm of his party since all of the three new appointees hail from the Akan tribe at large. Others commended Bedie for the appointments that they perceive as a move to rejuvenate the party in view of the 2025 presidential election. 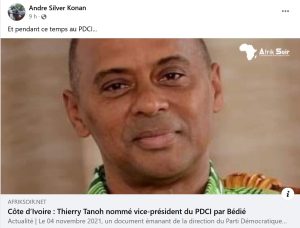 In a separate post, Andre Silver Konan reports on Issiaka Sangare, secretary general of the Ivorian Popular Front (FPI), saying that they “invited former First Lady Simone Gbagbo to their party’s convention” slated for 13 November, and “she did not say no.” The post generated 109 likes and 46 comments mostly questioning why the FPI continues to run after old comrades who have clearly showed their lack of interest for the party. Some hinted that should Simone Gbagbo even appear at the FPI convention, she would forever lose the support she may be enjoying now.

Background: The FPI organizes its convention on 13 November and is keen on showing that it remains strong despite the split with founder Laurent Gbagbo who created a new party, leaving what he called the “empty envelope” to Affi N’Guessan. 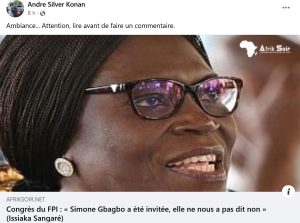