The following report highlights major news developments in politics, economy, health, and security in Cote d’Ivoire as of 28 October. This edition focuses on a commentary relating to the opposition’s stance against the ruling coalition, a government anti-corruption campaign, a government’s plan to support the private sector, COVID-19 update, and a planned meeting between President Alassane Ouattara and opposition leader Pascal Affi N’Guessan. The report includes background information to add context to the news items.

Background: Division within the opposition was exacerbated by the departure of former President Laurent Gbagbo from the Ivorian Popular Front (FPI) and the formation of a new party – the Party of African Peoples-Cote d’Ivoire. Observers accuse Gbagbo of focusing on the release of his supporters, while other parties such as the Democratic Party of Cote d’Ivoire, the UDPCI, and the FPI are calling for an inclusive dialogue.

On 27 October, the Ivorian Government launched an awareness campaign to sensitize the Defense and Security Forces against corruption. The campaign mainly targets officers of the Customs Department. Epiphane Zoro Bi, the Minister in Charge of Good Governance, urged the Customs officers to commit to intensify their actions in favor of good governance and the fight against corruption.

Background: The Ivorian public generally has a poor perception of the Customs Department, which has caused the state to lose considerable funds.

Media reports quoted Prime Minister Patrick Achi as reassuring Ivorian private sector of the government’s support in the transformation of their products. After visiting fields of cotton, cashew nuts, and rice in the northern Poro region, Achi mainly addressed people working in the agricultural sector and urged them to put in place strategies to boost their production. He said that the government will provide them with technical support.

Background: The Ivorian private sector is facing challenges in transforming agricultural products due to a lack of technical support. PM Achi declared that one of President Alassane Ouattara’s priorities in his governance is to provide solutions to the sector before 2025.

Independent journalist Andre Silver Konan on 28 October posted on his Facebook “Affi will visit Ouattara (28 October 2021), 3 months after the latter’s encounter with Gbagbo. We will laugh out loud with the double standard comments!” The post that depicts how partisan postures dominate Ivorians’ analyses stirred 59 comments and 151 likes. Comments vary. Some users claim that Affi’s visit to Ouattara is “normal” while others suggest that Gbagbo’s supporters will accuse Affi of plotting with Ouattara’s party while they applauded their own Gbagbo’s 27 July visit to the Presidential Palace. 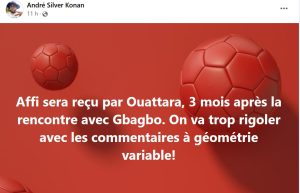