The following report highlights major news developments in politics, economy, health, and security in Cote d’Ivoire as of 27 October. This edition focuses on a meeting between the Senate President and the Israeli Ambassador, COVID-19 update, a government donation of vehicles to the security forces, ex-First Lady’s refusal to join Gbagbo’s new party, and speculations over reintegration of Gbagbo’s allies in the civil service. The report includes background information to add context to the news items.

According to media reports, Jeannot Ahoussou-Kouadio, the President of the Senate, met with Leo Vinovezky, the Ambassador of Israel, in Yamoussoukro. Both me discussed ways to boost cooperation between the two countries. Among other issues, Ahoussou-Kouadio urged the Ambassador to enable Ivorian youth to integrate Israeli companies based in Cote d’Ivoire, especially in Yamoussoukro and Tiebissou, and operating in the processing of cashew nuts and the production of tomato. 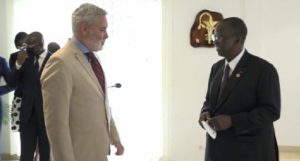 Media reported that the Ivorian Government donated 98 vehicles to the Defense and Security Forces . Defense Minister Tene Birahima Ouattara presided over the donation ceremony on 26 October in the presence of General Lassina Doumbia, the Army Chief of Staff, and General Alexandre Apalo Toure, the Higher Commander of the Gendarmerie. Ouattara said that the donation aimed to “equip the soldiers for the success of their missions on the territory and even beyond the Ivorian borders.”

Observateur Citoyen, a Facebook page with more than 350,000 followers, on 26 October posted a story about former First Lady Simone Gbagbo rejecting an offer from Laurent Gbagbo to join his new party as a member of the Strategic Council. The post generated 90 comments. Users were divided among supporters of Simone Gbagbo who believed she reacted correctly since Laurent Gbagbo already announced his marital and political divorce from her. Others said that they only know Laurent Gbagbo as their leader and Simone should not mix household drama and politics.

Background: Upon his return from The Hague via Belgium, Laurent Gbagbo immediately issued a statement demanding divorce from Simone Gbagbo and made regular references to and appearances alongside his concubine Nadiany Bamba (aka Nady Bamba.) Ever since, both members of the former presidential couple have taken separate routes. 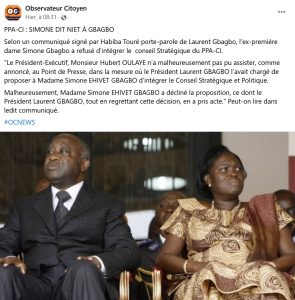 Antoine Tiemoko Assale, an investigative journalist and current member of the Ivorian Parliament on 26 October, posted a comment on his Facebook page with 78,000 followers. The post criticized the way the government is handling the reintegration of Gbagbo stalwarts who returned from exile. Using the example of Justin Katina Kone, who was just reintegrated in the Public Service, he wondered why that occurred so swiftly while dozens of workers of the public administration who went into exile for the same reasons, stayed out of the country during the same period, and returned to the country are yet to regain a position in the administration. The post generated 497 comments, 85 shares, and about 1,500 likes. Users who commented were mostly supportive of Assale’s criticism and said Ivorian politics are prone to shameless compromising. Some urges the youth to draw lessons from these kinds of moves and refrain from giving their lives for politicians.

Background: Justin Katinan Kone, a former Budget Minister under Gbagbo, was recently reintegrated in the Civil Service shortly after returning from a 10-year exile in Ghana and still having a 20-year in jail sentence pending for his alleged involvement in a theft at the national branch of the Central bank of West African States.