The following report highlights major news developments in politics, economy, health, and security in Cote d’Ivoire as of 26 October. This edition focuses on ex-First Lady’s refusal to join Gbagbo’s new party, a border security meeting between Cote d’Ivoire and Liberia, and appointment of key allies in Gbagbo’s new party. The report includes background information to add context to the news items.

Media reports said that former First Lady Simone Gbagbo rejected a proposal by former President Laurent Gbagbo to join the Strategic and Political Council of his newly-formed Party of African People of Cote d’Ivoire (PPA). This is the second call that Simone rejected as in September, she refused to participate in the organization of the founding convention of the new party, saying that she was not consulted in advance.

Background: Upon his returned to Cote d’Ivoire from the International Criminal court, Laurent Gbagbo asked for a divorce with the former First Lady with whom he founded the Ivorian Popular Front. 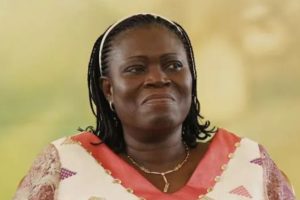 Media reported that the Security Ministers from Cote d’Ivoire and Liberia met in Liberia on 22 October to discuss ways to reinforce security around the border of the two countries. The UNDP and the International Organization for Migrants sponsored the meeting. Ivorian Security Minister Vagondo Diomande declared that terrorist activities compelled the two countries to collaborate and anticipate any attack at their border.

Background: Terrorist movements have recently targeted northern Cote d’Ivoire. In April, Liberia pledged to prevent rebel attacks from its territory on Cote d’Ivoire, where security sources reported that Liberian documents were found on assailants who raided a military camp outside Abidjan.

The Facebook page of Parti des Peuples Africains (with 102,924 followers) on 25 October posted the lineup of officials that former President Gbagbo freshly appointed to lead his new party. The officials include, among others, Gbagbo himself as President, former minister Hubert Oulaye as Executive President, former exile Medard Adia Damana as Secretary General, and former Budget Minister Justin Katinan Kone, as spokesperson. Users who commented mostly expressed support for the team. 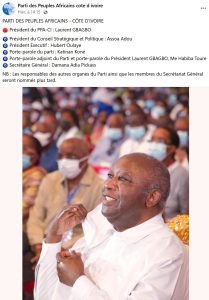 A number of Facebook pages including Linfodrome.ci, Gor tv, and Karol Epse Serikpa on 26 and 25 October reported the “reintegration” of Justin Katina Kone in the General Directorate of Taxes of the Civil Service. The news stirred some controversy with people asking how Katina Kone happened to be so swiftly reintegrated while other Gbagbo stalwarts continue to be kept away from the same process. Some users even hinted that this reintegration is the sign that Gbagbo appears to be more into deals with Ouattara than Affi N’Guessan, a former Gbagbo ally who many Gbagbo supporters say have ties with the ruling coalition.

Background: Justin Katina Kone, a former Minister of Budget under Gbagbo has been served a 20-year jail term for his alleged hold up of funds in 2011 at the local representation of the Central Bank of West African States.