The following report highlights major news developments in politics, economy, and security in Cote d’Ivoire as of 20 October. This edition focuses on former President Laurent Gbagbo’s rejection of an alleged government attempt to lower age limit for presidential candidates, the launch of the general population census, an attack against Ivorian security forces, and border security. The report includes background information to add context to the news items.

During a 19 October interview on French television France24, former President Laurent Gbagbo criticized an alleged attempt by the Ivorian ruling party to put an age limit for presidential candidates. He said that “in a civilized country, one does not limit candidates because of their age,” adding that “Joe Biden is older than me.”

Background: Political analysts said that the authorities’ plan to lower the age limit for running for president to 75 could thwart Laurent Gbagbo’s political ambitions. 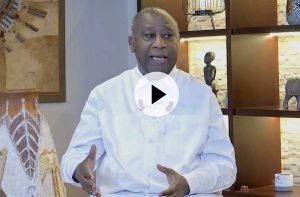 Media reported that prior to the 2021 general population census scheduled from 8 to 28 November, the director general of the National Institute of Statistics (INS) urged people living in Cote d’Ivoire to open their doors to the 28,500 census agents that will be deployed across the country.

Background: The census will provide the size, structure, and spatial distribution of the population to enable the government to meet people’s basic social needs — health, education, employment, and security — in a sustainable manner. The latest population of Cote d’Ivoire is estimated at 28,088,445 inhabitants.

On 19 October, General Lassina Doumbia, the Chief of Defense Staff, issued a communique reading: “On the morning of Tuesday, 19 October 2021, at around 8:30 AM, a sniper opened fire on an observation post of the Armed Forces of Cote d’Ivoire (FACI) located one kilometer northeast of Tehini, causing a light injury to the men on duty. The soldiers’ response neutralized him.

The Chief of Staff of the Armed Forces congratulates the soldiers whose vigilance enabled to thwart this criminal act.”

Background: On 19 October, Ivorian media reported that an unidentified terrorist group attacked a position of the Ivorian security forces in the northeast of Cote d’Ivoire. Recently, the minister of planning and development visited the region and urged the Fulani community to get involved in the fight against terrorist.

Media reported that the Ivorian Minister of Interior and Security, General Vagondo Diomande, and the Burkinabe Minister of Territorial Decentralization, Clement Pengwengue Sawadogo, met in Bobo-Dioulasso on 18 October. The two ministers agreed to reinforce security cooperation within the Defense and Security Forces at their common border. They also agreed to intensify joint military operations and define a budget planning for the acquisition of military hardware to secure the border.

Background: This marked the second edition of meetings between Ivorian and Burkinabe ministers in charge of territorial administration. Terrorist groups have often targeted the border between Cote d’Ivoire and Burkina Faso.

On 20 October, Traore Adams Breaking News, a Facebook page with more than 22,000 followers that seems to be connected with the Ivorian Presidency, posted a statement by Chief of Defense Staff Lassina Doumbia “congratulating his men for neutralizing a sniper in the northeastern locality of Tehini” on 19 October. In the post, General Doumbia said a member of the Ivoirian troops sustained light injuries in the attack.

This official statement contradicted earlier reports that tended to give a toll of two to three “jihadists” killed. 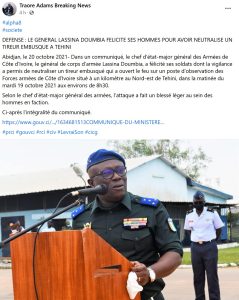