The following report highlights major news developments in politics, economy, health, and security in Cote d’Ivoire as of 19 October. This edition focuses on the return of President Alassane Ouattara from France, the launch of a Belgian bank in Abidjan, a government initiative against breast cancer, and an alleged terrorist attack in the northeast. The report includes background information to add context to the news items.

President Ouattara Returns From France After Meeting With President Macron

According to a 19 October report on a state-owned newspaper, President Alassane Ouattara returned to Abidjan after spending eight days in France. Ouattara and Macron discussed debt reduction and development contracts. Both men plan to launch the third edition of that development financing mechanism which aims to convert debt into grants for the indebted country. The two leaders also pledged to counter terrorism in West Africa.

Background: President Ouattara left Abidjan for France on 10 October and returned on 18 October. As part of a global counterterrorist initiative, Cote d’Ivoire inaugurated the International Academy of Counterterrorism in the town of Jacqueville on 10 June.

Media reported that the Belgian Public Development Bank (BIO) opened its first office in Cote d’Ivoire on 14 October. During a press conference at the residence of the Belgian Embassy in Abidjan, Maximilien d’Harcourt, BIO’s director for Abidjan said that the Bank is dedicated to developing countries where it provides funds for the private sector and micro-finance institutions. The Bank also provides funds for companies in the sector of renewable energy, agri-business, education, and health.

Background: According to a 2020 report by the Central Bank of West African States, Cote d’Ivoire had the highest inclusion rate in the region with 77.9 percent, followed by Benin (77.8 percent) and Togo (72.3 percent). International banks in Cote d’Ivoire include Societe Generale Cote d’Ivoire, BICICI, and Bank of Africa among others.

A 19 October report by a state-owned newspaper said that the government launched a program in the south-central region of the District Autonome des Lacs to detect breast and cervical cancer for 3,000 women. The women received free screening. The report added that the program also includes anti-COVID-19 fight.

Background: Reports say that women who are less than 35 years old are more and more affected by breast cancer in Cote d’Ivoire. The country records more than 3,300 new cases and more than 1,700 deaths every year.

On 19 October, Michael Gbagbo, a blogger with 118 followers on his Facebook page posted the following: “A position of the security forces was attacked by terrorists in the locality of Gogo, on the Tehini-Doropo road (northeast), in the night of 18 to 19 October. Another attack is underway in Bouko, on the Doropo-Bouna axis (northeast).”

Background: On 16 October, Minister of Planning and Development Niale Kaba visited the northeastern Bounkani region and urged the Fulani community to bring its contribution in the fight against terrorism. 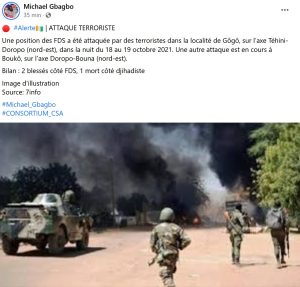 Presidence de la Republique de Cote d’Ivoire, the official Facebook page of the Ivorian presidency, with 780,000 followers, on 18 October posted pictures of President Ouattara greeting cabinet members at the airport with the caption “President of the Republic, Alassane Ouattara, returned to Abidjan on 18 October, after a stay in France where he had a working dinner with his French counterpart, Emmanuel Macron, at the Palais de l’Elysee.” The post generated 475 comments, 3,500 likes, and was shared 360 times. Most comments welcome President Ouattara upon his return and commend him for his good work on behalf of the country. Some users expressed their concerns about various issues including jobs and education, while others criticized a “prefect” who went to take orders from his boss. 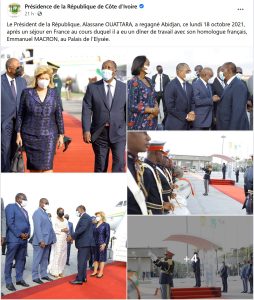