The following report highlights major news developments in politics, health, and security in Cote d’Ivoire as of 18 October. This edition focuses on the formation of a new political party by former President Laurent Gbagbo, COVID-19 update, and counterterrorism initiatives. The report includes background information to add context to the news items.

Former President Laurent Gbagbo launched a new political party called the Party of African People of Cote d’Ivoire (with its French acronym, PPA-CI — Parti des peuples africains de Côte d’Ivoire). Gbagbo was elected chairman of the PPA-CI in the night of 16 to 17 October. Upon his election, he declared: “The PPA-CI is a structure to prepare my withdrawal.”

Background: Gbagbo returned to Cote d’Ivoire on 17 June after the International Criminal Court acquitted him from charges of crimes against humanity in the 2010-2011 electoral crisis. He decided to form a new party with a view to get out of what he called the “sterile controversy” within his former party the Ivorian Popular Front, led by his former Prime Minister Affi N’guessan. He also wanted to set up a framework of political struggle to serve the cause of pan-Africanism. 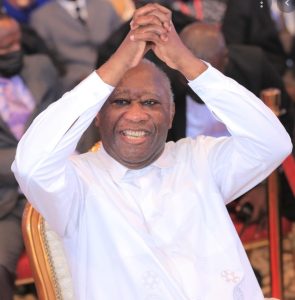 Several Ivorian media outlets quoted Adama Bictogo, the executive director of the ruling Rally of Houphouetists for Democracy and Peace (RHDP), as saying that “President Alassane Ouattara and the RHDP are willing to strengthen ties with the new party of Gbagbo.” Bictogo urged Ivorians to give peace a chance “beyond the misunderstandings.”

Background: Bictogo represented President Alassane Ouattara at the 16-17 October convention of Gbagbo’s new party. He was accompanied by five other Members of Parliament from the RHDP. 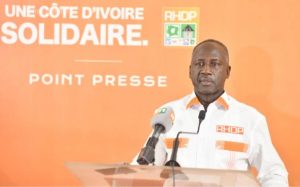 Media reported that as of 17 October, the Ivorian Ministry of Health recorded 10 new cases of COVID-19 out of 2,093 samples taken, representing 0.4 percent of positive cases, 76 cured and 1 death.

Media reported that Niale Kaba, the Minister of Planning and Development, who is also the mayor of the northern town of Bouna in the Bounkani region, presided over a sensitization with the Fulani community living in the region, as part of the fight against terrorism.

Background: The purpose of the campaign was to seek solutions to curb terrorism that plagues the Bounkani region. The Fulani community is regularly cited in terrorist attacks and other acts of insecurity in northern Cote d’Ivoire, where unidentified gunmen have launched attacked against security forces in recent years.

Radio PDCI RDA, a Facebook page close to the opposition Democratic Party (PDCI-RDA), on 18 October posted a reaction of University researcher Tiburce Koffi who criticized Laurent Gbagbo as an “ultra nationalist” who claims to promote Pan-Africanism and whose supporters may “not know the meaning” of the concept. The post generated 332 comments that were mostly hostile to Koffi’s statement. In another post, user Brico LeGbagboïste reprinted a statement by journalist Andre Silver Konan backing that of Tiburce Koffi. This post raised 711 commentaries. The majority of users who commented referred to Tiburce Koffi and Andre silver Konan as “men with no vision,” adding that they are unable to understand the scope of Gbagbo’s party. 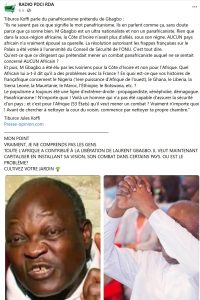 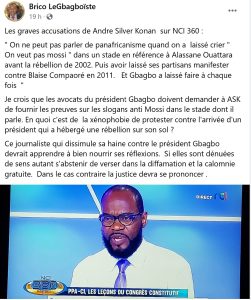