The following report highlights Ivorians netizens’ reactions to various events, including news that Prime Minister Patrick Achi was evacuated to France for medical treatment and former President Laurent Gbagbo’s appointment of Simone Gbagbo to chair the committee for the creation of his new party. The report includes background information to add context to the discussions.

On 24 August, Souley De Paris, a cyber-activist close to former Prime Minister Guillaume Soro, posted on his Facebook account with more than 350,000 followers that Prime Minister Patrick was “back in Paris for his medical check-up.” The post added : “If the Prime Minister is in Paris as our sources said, then what is the use of their much vaunted hospitals?” As at 1045 GMT on 25 August, the post generated more than 800 likes, 137 emojis of laughs, 72 emojis of sadness, 240 comments, and was shared 68 times. The pro-ruling party netizens downplayed the news. A minority of the comments said the fact that the prime minister goes to France for medical treatment shows that one cannot have quality medical treatment in Cote d’Ivoire’s hospitals.

Background: On 12 May, Prime Minister Patrick Achi was rushed to Paris via an Ivorian presidential fleet aircraft to the American Hospital in Neuilly, France, where he underwent a surgery. 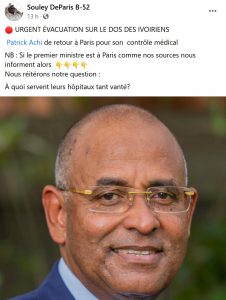 A 24 August post on the Facebook page of Radio PDCI RDA with more than 350,000 followers said that former President Laurent Gbagbo appointed former First Lady Simone Gbagbo to chair the scientific committee for the creation of a new party that he recently announced. The post said that the news came despite Laurent Gbagbo’s request to divorce with Simone. As at 1045 on 25 August, the post generated 705 likes, 188 comments, and was shared 124 times. The majority of the comments hailed the news, with one netizen saying “Laurent and Simone Gbagbo form the best political duo in Cote d’Ivoire.”

Background: On 23 June, Laurent Gbagbo announced his intention to seek divorce with Simone, who according to media reports, is the vice chairman of the official branch of the opposition Ivorian Popular Front led by Pascal Affi Nguessan. 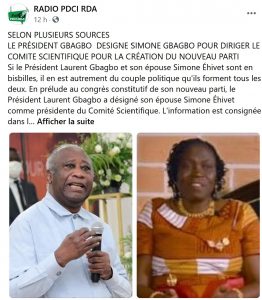