The following report highlights Ivorians netizens’ reactions to various events, including news about President Alassane Ouattara’s COVID-19 test, the formation of a new political party by former President Laurent Gbagbo, and updates on the COVID-19 situation in Cote d’Ivoire. The report includes background information to add context to the discussions.

The Facebook page of the news portal Abidjan.net, with more than 1 million members, reported on 18 August that President  Ouattara was tested negative to COVID-19. The post generated more than 1,600 likes, 301 comments and was shared 35 times as at 1100 GMT on 19 August. Most of the comments “thank the Lord for the quick recovery of the head of state” while a minority expressed doubt about his real health condition.

Background: On 6 August, a day before the celebration of the Independence Day, President Ouattara announced that he had been in contact with a person infected with the COVID-19. The opposition, however, felt that this was a strategy for the president to avoid inviting some of its opponents to the traditional parade of 7 August. 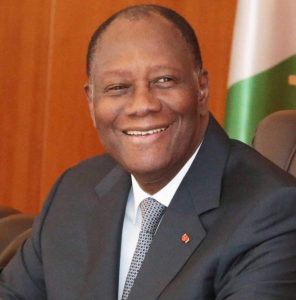 Reaction to Formation of New Political Party by Ex-President

On 18 August, the Facebook page Front Populaire Ivoirien-Gbagbo published a press release from Justin Katinan Kone, the spokesman for ex-president Laurent Gbagbo, relating to a recent meeting between Gbagbo and his close allies in Abidjan. The participants to the meeting hailed Gbagbo’s  decision to form a new party to continue his political struggle. As at 1100 GMT on 19 August, the post generated 996 likes, 80 comments, and was shared 109 times. The majority of the netizens congratulated Gbagbo for his decision.

Background: During an extraordinary central committee meeting on 9 August, Gbagbo decided to break away with the Ivorian Popular Front led by Pascal Affi Nguessan and to form a new party.

A post from the official Facebook page of the Ministry of Health and Public Hygiene with more than 489,405 members said on 18 August that 253 new cases of COVID-19 were identified out of 4,241 samples, i.e., 6 percent of positive cases, 192 cured, and 4 deaths. As of 1100 GMT on 19 August, the post generated 123 reactions, 35 comments and was shared 25 times. Overall, the comments criticized a “poor management” of the pandemic. 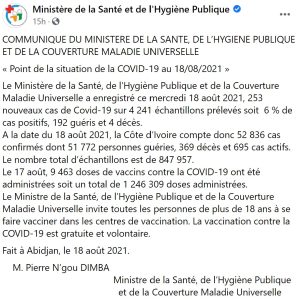