The following report highlights Ivorians netizens’ reactions to socio-political and health issues. Reactions focus on the launch of the second phase of the Abidjan metro by the prime minister, the brief arrest of a close ally of former President Laurent Gbagbo, and reports of suspected Ebola virus cases in Abidjan. The report includes background information to add context to the discussions.

In an 18 August post on his Facebook account that has more than 185,000 followers, Prime Minister Patrick Achi announced the launch of the “second phase” of the Abidjan metro: “With the #metro, Abidjan is changing, Abidjan is moving forward! Because it is not only a metro that is being built, it is truly a whole city that is being transformed for the well-being of its inhabitants as well as the efficiency of its companies and its administration.” As of 1235 GMT, the post generated more than 3,600 likes, 492 comments, and was shared 354 times. Most of the comments hailed the government initiative. A limited number of the comments criticized the government urging it to implement such projects in other localities of Cote d’Ivoire.

Background: The Abidjan Metro is a public passenger transport service project that complements existing transport services which are currently unable to meet the huge demand for transport between the various communes of the Autonomous District of Abidjan, particularly along the north-south axis. 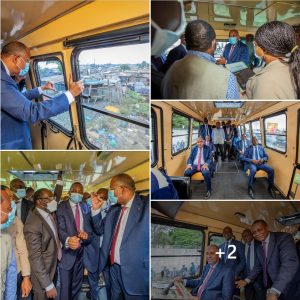 According to a 17 August post on Pdci24, a pro-opposition discussion forum with more than 421,000 followers, “former minister Moise Lida Kouassi was summoned in the morning of 17 August to the National Gendarmerie of Cote d’Ivoire for judicial investigation. According to his family, he is about to be transferred to the MACA [the Abidjan House of Arrest and Correction].” One netizen said that he was charged with inciting “popular revolt” among others. As of 1235 GMT, the post generated more than 450 likes, 46 emojis expressing surprise, 42 emojis expressing sadness, and was shared 59 times. The post also recorded more than 154 comments generally criticizing the arrest. Other netizens, however, reported that Kouassi was released in the afternoon the same day.

Background: Moise Lida Kouassi is close ally of former President Laurent Gbagbo. He lost the latest legislative election in the town of Lakota under the banner of EDS [Together for Democracy and Solidarity], a pro-Gbagbo coalition. 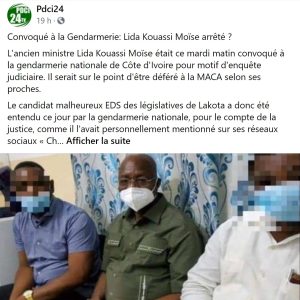 Netizens React to Report of Ebola Cases in Abidjan

A post on INFOS Nationale, a discussion forum with more than 96,075 members, said that in addition to the first confirmed case in Abidjan, the World Health Organization identified one suspected case and one new case. As of 1235 GMT on 18 August, the post generated 90 likes, 12 emojis expressing surprise, and eight emojis expressing sadness. The post recorded 14 comments, generally expressing desperate feelings about the situation.

Background: The outbreak in Cote d’Ivoire is the third on the continent in 2021 after those in the Democratic Republic of Congo. 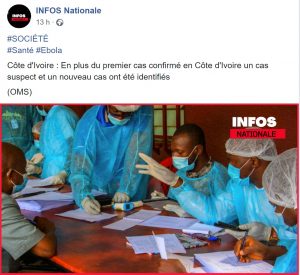