The following report highlights major news developments in politics and health in Cote d’Ivoire as of 16 August. The report focuses on key points from opposition leader Pascal Affi Nguessan’s recent news conference. It also focuses on a new Ebola fever case discovered in Abidjan. The report includes background information to add context to the news.

Ivorian media reported that Pascal Affi N’guessan, the chairman of the Ivorian Popular Font (FPI), held a news conference in Abidjan on 14 August. Among other issues, Affi N’guessan accused former President Laurent Gbagbo of causing the political crisis within the FPI. He announced his intention to run in the 2025 presidential election under the banner of the FPI. Affi N’guessan also denied allegations that he signed any deal with the ruling Rally of Houphouetists for Democracy and Peace.

Background: Affi Nguessan’s news conference followed a recent decision by Gbagbo to break away from the FPI and form his own party. Since Gbagbo returned to Cote d’Ivoire after the International Criminal Court acquitted him of charges of crimes against humanity, he faced a leadership tussle with Affi Nguessan for the control of the FPI, a party he had formed. 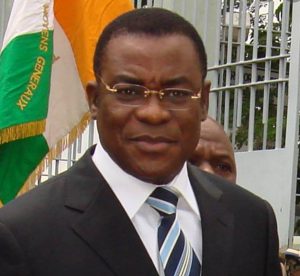 Ivorian media reported that the country recorded one Ebola fever case in Abidjan. The patient is currently in isolation at the treatment center for epidemic diseases at the Treichville University Hospital. Prime Minister Patrick Achi held an emergency meeting on 14 August and came up with the following measures: reactivate the community surveillance of the Ebola response; follow-up of all identified contacts; awareness raising, prevention, diagnosis, and management of confirmed cases; immediate vaccination of target groups; respect guidelines for the diagnosis and management of hemorrhagic fevers; continued strict adherence to barrier measures against the COVID-19 which remain valid for Ebola virus disease; intensive cross-border collaboration with Guinea; implement standard procedures of the International Health Regulations.

Background: The case was imported from neighboring Guinea. An 18-year-old Guinean girl left Labe, Guinea, for Abidjan by road. She arrived in Cote d’Ivoire on 11 August and was diagnosed positive and immediately taken in charge by the health services on 12 August 2021 at 2000 GMT.