The following is a summary of major developments in Cote d’Ivoire as reported in Ivoirian traditional media on 29 April. The report focused on major decisions from a recent cabinet meeting, the return from exile of supporters of former President Laurent Gbagbo, worries expressed by population following attacks on Kafolo in the north, Defense Minister’s visit to a Gendarmerie camp, and netizens welcoming release of civil society activist. The report contained editorial notes aimed at providing context to the major pieces of information.

Following a 28 April cabinet meeting, the government announced a series of measures, including the rerun of the legislative election in Ouaninou, Jacqueville, Dabouyo-Gueyo, Grand Bereby, Seguela, and Mankono on 12 June. The government also pledged to intensify the COVID-19 vaccination drive across the country with the goal to immunize 16,309,815 people by end of 2021.
(Source: Fraternite Matin, pages 2-3)

Note: The Constitutional Council had cancelled the results of the 6 March legislative election in areas where irregularities were observed and places where the winners died. Regarding the pandemic, health authorities launched a vaccination campaign on 1 March, but the population appears reluctant to get immunized, due to rumors questioning the safety of the vaccine.

Amadou Coulibaly, the Minister of Communication and Government Spokesperson, announced that Katinan Kone, Damana Pickass, and other close allies of former President Gbagbo will soon return to Cote d’Ivoire from their exile. The Minister added that the UNHRC will oversee the return.
(Source: L’Intelligent d’Abidjan, page 4)

Note: Katina Kone and Damana Pickass, among other supporters of Gbagbo, were exiled following the 2010-2011 post-electoral crisis. They plan to return on 30 April.

In an interview, Tiemoko Bamba, the chief of the Kafolo Bac village located near the border with Burkina Faso, expressed worries following repeated attacks on his locality. He said since the first attack that occurred in June 2020, the population felt threatened before the second attack on the night of 28 to 29 March. Bamba described the attackers as “terrorists,” who were in the forest and on the river. He said the population believes that the terrorists are still in the area. Bamba said that the security forces foiled another “terrorist” attack on 22 April.

The chief confirmed the journalist’s assertion that the attackers were Fulanis who came from neighboring Burkina Faso and who mainly targeted security forces. He also said that the terrorists are attracted by the forest, which he described as a “peaceful place for them to settle.”
(Source: Le Nouveau Reveil, pages 6-7).

Tene Birahima Ouattara on 28 April visited the Gendarmerie camp of Agban in Abidjan and urged the security forces to accompany him in his mission to secure the country.
(Source: Fraternite Matin, page 8)

Note: Suspected jihadists have targeted Cote d’Ivoire in less than a year. In June 2020 and March 2021, unidentified gunmen attacked Ivoirian Army bases in the northern town of Kafolo at the border with Burkina Faso. On 1 and 12 April, two improvised explosive devices exploded around Kafolo.

A post on Observatoire Libre de Cote d’Ivoire-Reloaded, a discussion forum with more than 8,500 members, said that Ivorian authorities released Pulcherie Edith Gbalet, a civil society activist, who was jailed on charges of inciting revolt. The post generated 65 comments, generally welcoming the release. 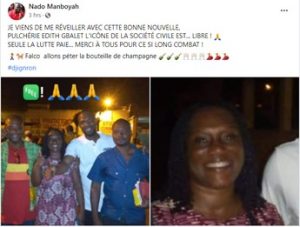 Note: Pulcherie Gbalet is the chairperson of Alternative Citoyenne Ivoirienne, a pro-opposition civil society organization. She was arrested on 15 August 2020 after she called to protest President Alassane Ouattara’s decision to seek a third term.