The following is a summary of major developments in Cote d’Ivoire as reported in Ivoirian traditional and social media on 24 April. The report focused on the return of President Alassane Ouattara to Abidjan, the government 2021 roadmap, government counter-terrorism efforts, and updates on COVID-19. The report also focused on social media discourse on patriotism and contained editorial notes aimed at providing context to the major pieces of information.

President Alassane Ouattara returned to Abidjan on 24 April after visiting France and the Republic of the Congo. (Source: Abidjan.net) 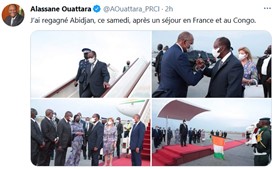 Note: On 9 April, President Ouattara left for France, later for the Republic of the Congo to attend the inauguration ceremony of President-elect Denis Sassou-Nguesso.

The Ivoirian Government unveiled its roadmap following a 23 April seminar held in Abidjan. The following decisions emerged among others:

The country will organize a donor conference in June with a goal to fund the International Counter-Terrorism Academy of Jacqueville (located at 60 kilometers west of Abidjan).
(Source: https://www.rfi.fr/fr/afrique/20210423-c%C3%B4te-d-ivoire-la-question-terroriste-au-c%C5%93ur-de-plusieurs-s%C3%A9minaires-%C3%A0-abidjan)

Note: Suspected jihadists have targeted Cote d’Ivoire in less than a year. In June 2020 and March 2021, unidentified gunmen attacked Ivoirian Army bases in the northern town of Kafolo at the border with Burkina Faso. On 1 and 12 April, two improvised explosive devices exploded around Kafolo.

Note: The COVID-19 vaccine is free in Cote d’Ivoire, but the country is facing a lack of demand, due in part, to conspiracy theory over the efficacy of the vaccine. News of the AstraZeneca suspension in Europe also slowed down the process in the country.

Netizens Speculate on Sense of ‘Patriotism’ of Ruling Party Supporters

A post on Observatoire Démocratique et Libre d’Abidjan (ODLA), a discussion forum with more than 24,600 members, wondering whether one should consider supporters of the Rally of Republicans (RDR) as “patriots,” generated 91 comments, generally saying that the ruling party supporters lack a sense of “patriotism. 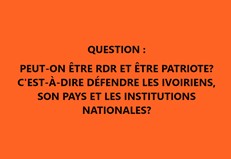 Note: In July 2018, the RDR merged with other political parties to become the Rally of Houphouetists for Democracy and Peace (RHDP) and designated Alassane Ouattara as its candidate for the 31 October 2020 presidential election. On social media, people who are critical of the ruling party continue to refer to the party as RDR because the other parties within the alliance are minor parties.

One Reply to “Cote d’Ivoire: Highlights of Reporting on Major Developments – 24 April 2021”